The lack of front men at the club has been causing a heavy debate on Charlton forums and social media with fans concerned it may cost the club promotion back to the Championship.

After a fifth home league win on the spin for the Addicks since April, then most people won’t care who scores just as long as we end up with 3 points.

So does a Twenty League goal a season player guarantee who promotion? No, far from it, but it does go a long way. 7 of the 9 promotions have seen someone hit that total.

So would a proflic front man help this current squad? That goes without saying, but with less than 2 weeks before the end of the transfer window, the manager is going to have to pull another rabbit from his magician’s hat from the bargain basement/loan market, or ask the owner for more funds.

However the likes of Stuart Leary, Mike Flanagan, Johnny Summers, “King” Arthur Horsfield & Dennis “Daisy” Edwards have ended up with that 20 plus mark, but for other reasons failed to gain the bubbly at the end of the season.

With the likes of Holmes, Clarke, Magennis & Forster-Caskey in the eleven and god willing they stay injury free then should be able to hit 40 league goals between them. Chuck in another 30 goals from the rest of the squad plus a steady back four keeping that ball out, then why can’t promotion happen.

Bolton went up as Runners Up from League One last season. 68 goals scored, and only 36 goals conceded.
Their top scorers was four different players with only nine goals each! And that includes one of their centre backs.

Here’s hoping that elusive 20 goal poacher arrives soon, but if not, promotion can still be achieved.

The season is upon us and as with the other 71 Football League sides, they all believe its going to be their season to gain promotion. For Charlton Athletic and current manager, Karl Robinson it’s vital that they are playing Championship football in 12 months time.

To do that a good start is not imperative, but recent history with the club has shown that if you start well, you have a good chance of success. 92/93 the exception to the rule. (22 points from the first 10)

First Ten League Games in seasons which lead to promotion.

The first ten league games this season in League One for the squad available to the manager should be able to comfortably pick up 18 points minimum and be in the top 6. A nice start and confidence will be gained.

However as seen last season, an average start is hard to pick up from (12 points from the first ten) and Charlton only entered the top 6 once all season (5th after 4 games with 7 points back in August)

Slade was sacked in November and the season was pretty much over there and then.

This time around the squad is better, has more quality, and should be promoted at the end.

Get that good start, Mr Robinson, or the inevitable consequences may arise around November time once again.

Well in my opinion it’s all of the above. Before the first home league of the game of the season, you want everyone 100% fit, raring to go, knowing what their role is in the team  and having a couple of decent wins in pre season, to have confidence on that Saturday at 3pm.

Already fans are questioning the recent tour of Ireland, with 3 games in 3 days, against 2 sides who have played over 20 games each in the top 2 tiers of Irish football and are near the end of their seasons (Runs from March – September) plus the current winners of the Leinster Senior League and like Charlton are in pre season.

Personally I would have liked to seen these games spread over a 5 day period, so the players are fresh for the next game. Pre season is not a holiday camp. It’s about hard graft, but 3 games in 72 hours does seem excessive.

Now to the results. One win and 2 defeats. The last one a 4-1 loss to the University side of Dublin, who play in the 2nd tier in Ireland.

If Charlton had won all 3 games, then social media would be full of views, that they will win League One at a canter, but it does not work like that. After the last 3 games, people are worried. Both wrong in my view.

Pre season in 1990, Charlton played Brentford, Exeter, Maidstone, Plymouth, Saltash United, Swansea and Welling. They won all 7 games, but when it came to the start of the League season, they were adrift at the bottom of the Second Division with One win from the first 11 games, plus knocked out the League Cup by Leyton Orient. The future of Lennie Lawrence was being questioned.

Pre season in 1993, results were a mixed bag, but a 2-1 home win against a full strength Arsenal team, must have been good for everyone’s confidence which then led into only one defeat from the first 14 League games.

You don’t get points for winning games in pre season, so why be over concerned. I would be more worried if we lost a couple of key players for 2/3 months, before the 5th August. If results don’t start well by the end of August, then be worried.

Enjoy pre season to meet up with old friends, have a few beers and watch a bit of football in the sun. Welling is always good for that. See you Saturday.

The pre season games are now under way, with less than 4 weeks before the start of a new season. On the pitch, optimism is high, with three new signings and a new three year contract accepted by last year’s Player of the Year, Ricky Holmes. No one of any note has left so far, so after last season’s unacceptable performance from all concerned at the football club, promotion is a necessity in a league full of poor quality bar Blackburn Rovers.

Karl Robinson has done well this pre season to work with the budget he has been given, bringing in Mark Marshall on a free and other players on small fees. A goalkeeper and a left back are required to fit the remaining places in the squad, but I’m sure that will be in place in the next couple of weeks. Also he has been resticted due to the poor decisions  made by the club in the past, offering ridiculous long contracts and high wages to the likes of Naby Sarr and Jorge Teixiera, which are now difficult to get rid of and bring in some much needed funds to his transfer kitty.

However in my opinion, this is a make or break season for the opinionated and chatty Liverpudlian. Promotion back to the championship or be relinquished of his duties at the end of May. The owner’s record on managers in the past has always been good business for the local labour exchange.

This squad is up there with the League One winning team from 2011/2012. Like for like the players are as good or some  cases better.

No one surely is looking at 101 points again, but there is no reason why this current squad cannot guarantee an average of two points per game and a top two place in League One, or at the very least a win at Wembley in the Play Off Final. Anything else and the season would have been another complete failure and totally unacceptable.

At 16/1 to win the League and 5/1 for promotion with some bookmakers, this should be easy money for anyone who likes a bet.

Off the pitch the same rumblings and going on’s continue. Season tickets sold around the 5,000 mark, 50% down on two seasons ago. The owner and Chief executive remain. Part of the ground has been closed due to lack of fans coming through the turnstiles. Different season ticket prices depending not on what stand you sit in, but different prices for different blocks in the same stand. Bar the ongoing work at the training ground and cheap season tickets in the Covered End, the rest is not ideal for a stable football club.

The protests are still around and looks highly likely that they are hear to stay until the owner sells, regardless of how well the team are doing. Some fans have made their points very clear and in some cases will not return to the Valley until he hands over the reins to someone else.

The dream scenario for Charlton fans this coming season would be promotion back to the Championship and new owners. However if we are looking at another season in League One in 12 months time, and no change in the ownership, then the anger is very likely to intensify. 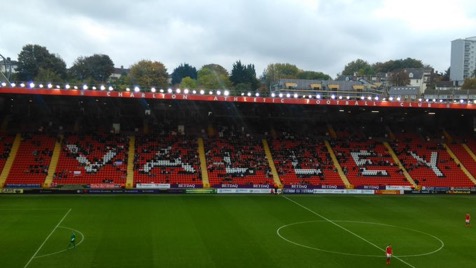